The market fell on a strong jobs report this past Friday. That’s good news, right? So why is the market down so much? We don’t mean to sound alarmist, but when the market drops 665 points on Friday and at one time today (Monday, Feb 5), was down another 1597 points in two days, it is a significant event given this represents a 10% decline in two days, which is the biggest percentage decline since Brexit.

Our January 19th web site “Blog” stated the market was very “over-bought” and a “sell-off” could happen any day”. Well, as we are aware, it is doing so as this letter is being written.

We encourage you to visit our web site frequently for important updates.

There are clearly technical and cyclical risks over the next few weeks and we believe we're in a somewhat expected corrective phase at this time of year. As you know, considering the huge upswing of recent weeks, the market is in uncharted territory and was extremely “over-bought”, meaning it was very susceptible to the sell-off we are experiencing. Until a “major” downtrend is confirmed (which could take some time and a lot more downside action, we have to remain bullish despite the “irrationality” of the market’s current pricing.

Where is the current support level? We believe the 24000’ish level ( the market touched the low of 23923 today, Monday) this may be an important support level where the market could experience a turn back to the upside as the level mentioned above represents a 10% correction from the high of 26616 (give or take a hundred points).

NOTE: Today, we closed down 1175 points at 24345, a little over our 24000 support level and if this level does not hold (as support), then we could be looking at something more drastic. If this was to happen, we will “alert” you and we strongly encourage you to contact our office for specific, individual advice on your account(s) as to what (if anything) you should do.

Ultimately, when this correction is over, we believe the market could move up much higher, but when is the big question. Does this happen this year or will it take a few years.

The announcement last Friday, (Feb. 2nd) indicated the U.S. economy added 200,000 new jobs in January. The unemployment rate was unchanged at 4.1%, a (17-year low). Wages ticked higher by 0.3%. The increase in hiring beat estimates of around 180,000. The current job participant rate (how many folks are actually working) stands at a healthy 62.7%.

The big headline is the spike in wages, which climbed 2.9% year-over-year, the fastest pace in more than eight years. That has Wall Street mavens squawking about inflation and bond yields. Main Street, on the other hand, is looking to the heavens and saying thank you.

Other good news includes earnings, which are coming in very strong. Guidance is typically cautious but bodes well for the market and speaks to a solid underlying economy

The market seems to have no end of how high it will go at this time having crossed the 26000 level for the first time in history. The market seems to be oblivious to things that used to “upset the apple cart” such as, North Korea, ongoing allegations of scandals and the Congressional angst over signing a new budget. It appears the current administration’s initiatives are actually working, however, as we all know, sooner or later, there will be some profit-taking resulting in a pull-back of some sort. Many of our charting indicators we utilize are showing a very “over-bought” situation, meaning a pull-back may be on the horizon. If this begins to unfold, we will do our best to alert you. What do we mean, pull-back? Well, a 5.00% to 10.00% is typically the norm for pull-backs, when they occur. This means the market could pull-back to somewhere between 24700 and 23400. This would actually be “healthy” for the market and the current “Bull” market would remain intact if this was the extent of a pull-back. Due to the parabolic up-move in the market, we have no support levels to share with you at this moment but if a turn down does begin, we will develop these and post them as soon as possible. Most all market sectors are participating in the move higher and providing the administration stays on track, we see anything related to infra-structure being a sector to move much higher. We have posted current chart of the market for you to see how the market has been performing. If you have any questions, we welcome your calls/emails. 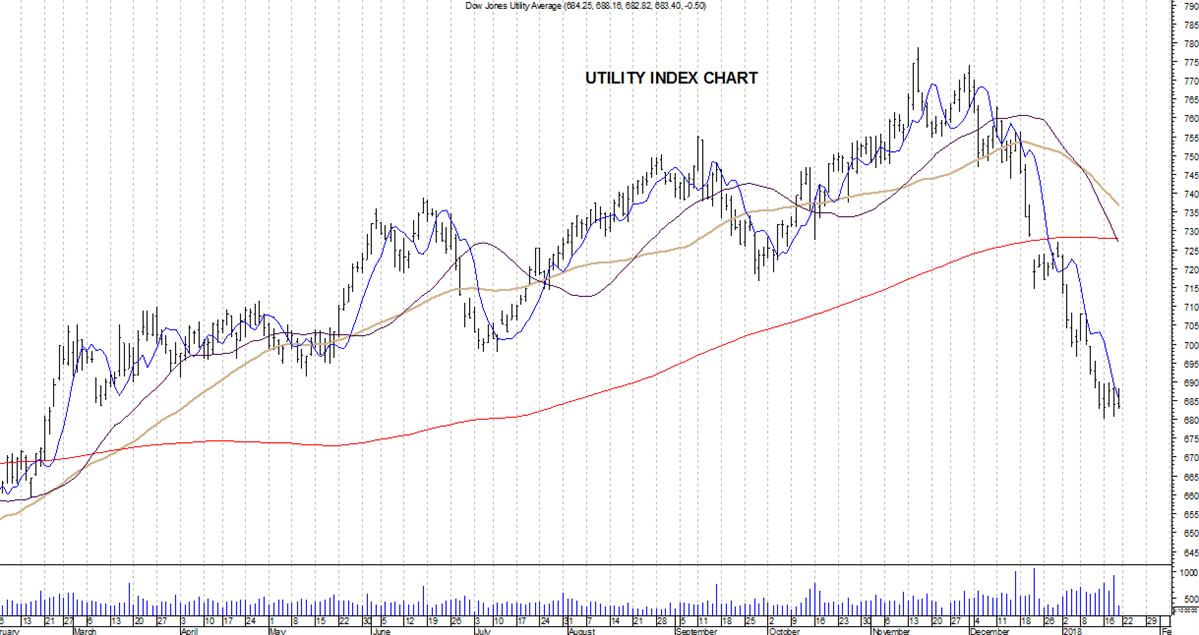 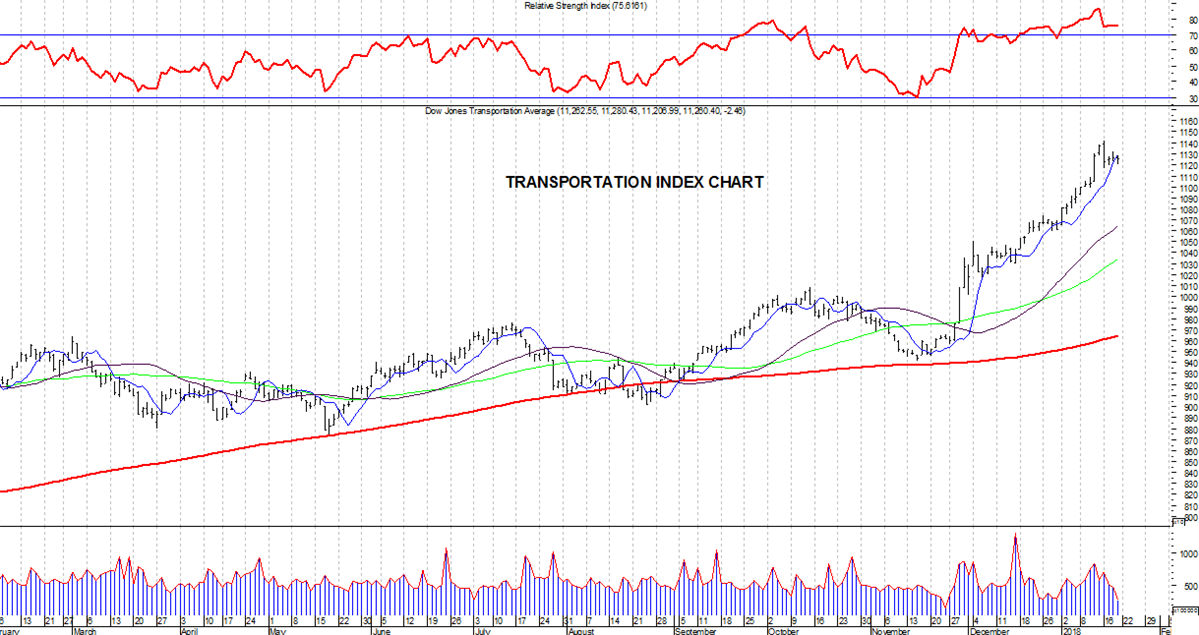 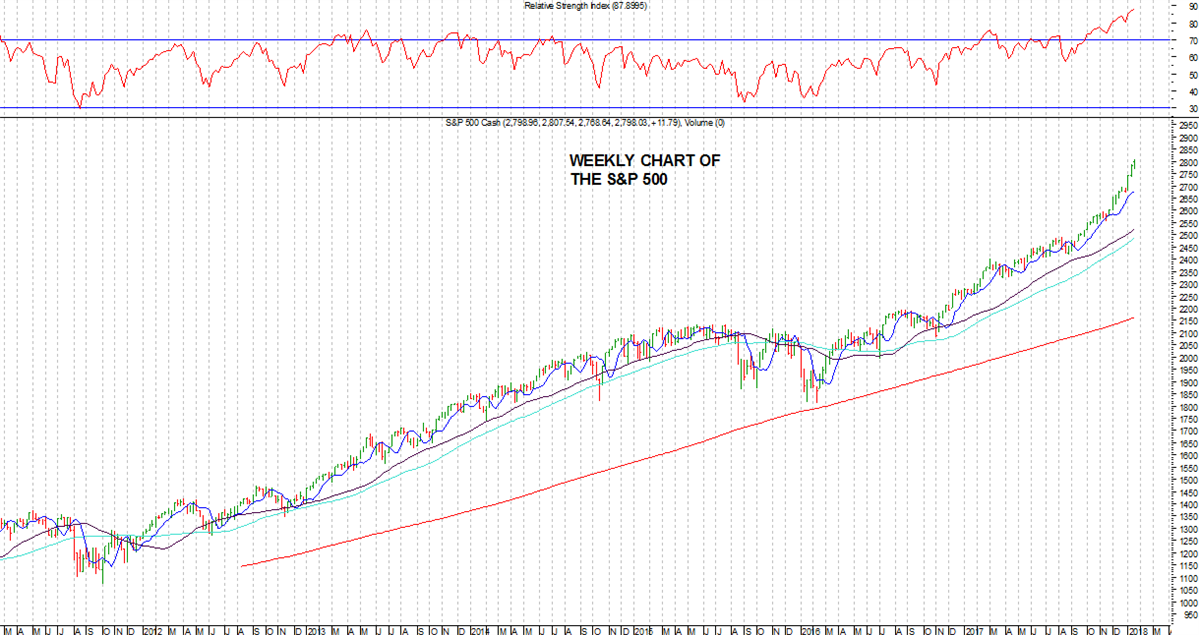 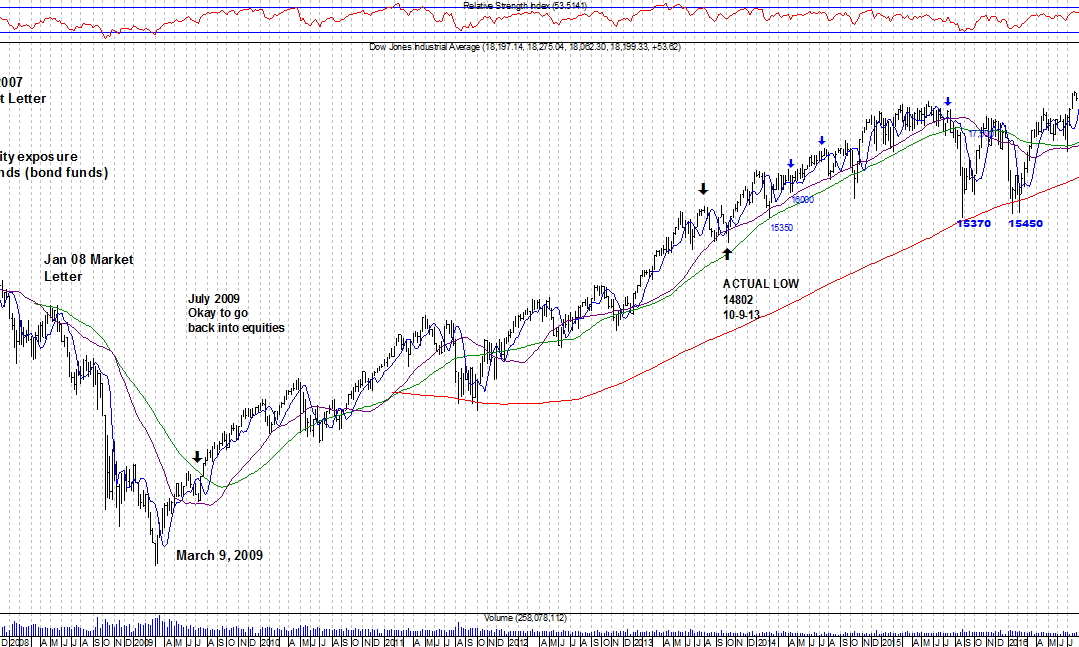 We are only twelve days away from a most contentious presidential election, and since mid-July, the market has gone “nowhere” trading in about a 600 point range (18600/18000). We believe the market will make a dramatic move based are who “takes the throne” on November 8th. If we have a Clinton win, the market will likely favor large, multi-national companies and financial companies like JP Morgan, Goldman Sachs and Bank of America. It has been evident over the past several months the Healthcare and Biotech sectors do not support a Clinton win. If we have a Trump win, the popular belief is the market will prefer the materials sector such as steel, sand, cement, all related to infrastructure and the Healthcare sector could rebound.How does this affect you, the investor/plan participant? Remember: the market WILL always adjust to whatever political environment it needs to exist in and 401(k) participants are investing for the long term.The major support in the market now is the 17960/17700 levels. If the 17700’ish number is violated, we could see much more downside. If you are risk adverse or have short timeframe to retirement, we suggest moving out of equities and into bond funds or cash if this happens. More importantly, contact our office for an individual review. We here are busy analyzing many mutual funds; their core stock holdings and how they will react to whichever candidate wins. As soon as the election is over, we strongly urge you to contact our office for a complete review of the investments available to you.Our viewpoint is that large cap value type mutual funds typically perform well... 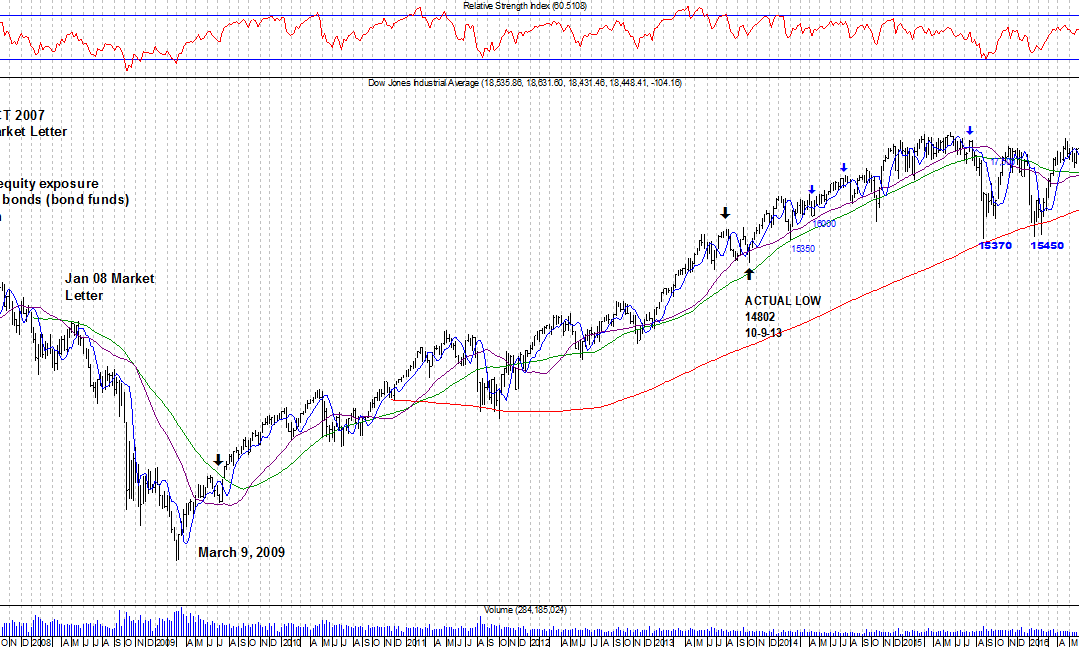 The market has been hovering around all times highs for six weeks creating what we market technicians refer to as an “overbought” situation and may be ready for some downside activity. If this proves to be the case, here are some support levels you need to know: 18250-18000-17800-17500’ish. If these levels do not hold, we could see a return to the 17000 low made in late June due to the “Brexit” issue.What to do now? Should the market not “hold” at the 17500’ish level, and if you are nearing retirement or have a low-risk tolerance, you may wish to move some allocations into cash or bond funds (bonds) which are relatively less risky than equities. If you expect a longer timeframe to retirement and your risk tolerance is on the high side, just ride this out.MARKET SECTORSENERGY (Oil) SECTOROil dipped to low about 3/4 weeks ago and has been moving up since, currently at $47’ish and may drop once again but most analysts (and us) believe it will be higher by year’s end. If you can handle the risk, this sector could end up being most profitable for you. HEALTHCARE SECTORThis sector continues to underperform. Both candidates have opposing viewpoints on the direction of health care. Until the outcome of the election, we may continue to see a decline in this sector. INTERNATIONAL SECTORWe do not suggest any allocations here, at this time.REAL ESTATE SECTORThis sector is performing very well and should be part of your allocations.TECH SECTORAfter performing well since late June, this sector appears to be running out of steam for now. You may wish to reduce exposure here.UTILITY INDEX... 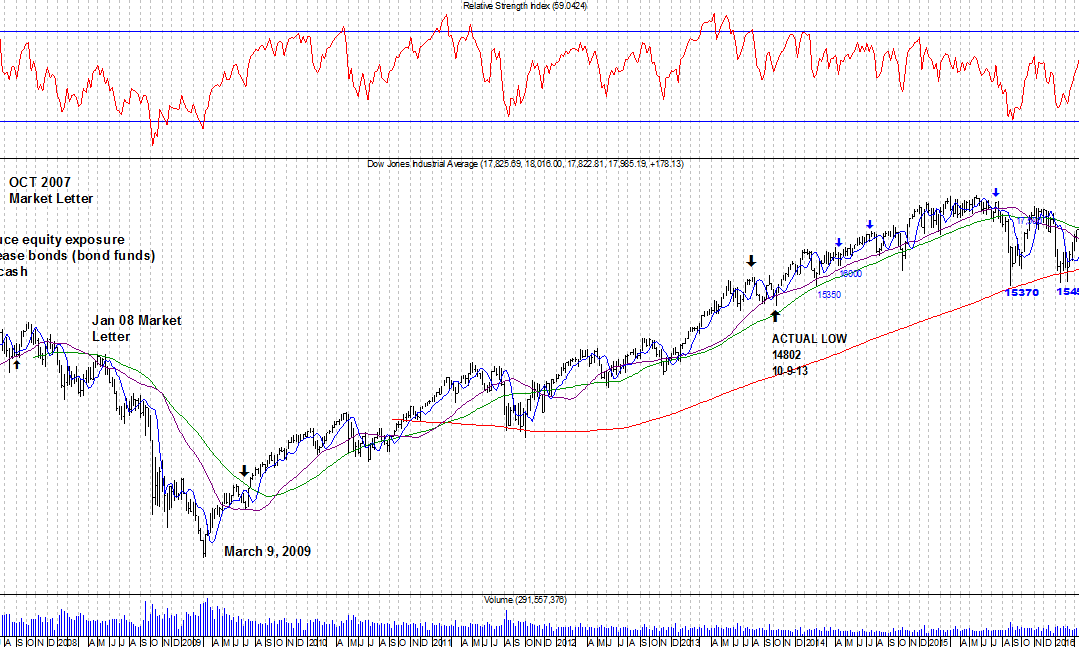 Given the extreme volatility since late last summer and the market nearing its May 2015 all-time high of 18,351, caution would be the “key” word here.Some may think, “Why caution?” if we are nearing the all-time highs of the market. Caution is advised when this happens because the market could possibly reverse direction violently as we near the general election. This could be the cause and effect since the market never likes uncertainty. Also, the recent upward trends in the market have done so on anemic volume. As we have previously shared, “volume is the fuel” that propels the market in either direction and without it, the moves are somewhat dubious.The current support numbers are as follows: 17850, 17700, 17600, 17500 (most important) and finally, the recent low made in May, 17200. Contact us if the market falls below 17200, it could possibly fall much more severely.What should you do if you are nearing retirement or risk adverse?We suggest a “dual strategy” if you are nearing retirement or risk adverse. Take a major portion of your current balances and allocate them into bond funds and cash. Become aggressive with future contributions only. This allows “dollar cost averaging” to actually work for you if the market were to have a severe sell-off between now and the elections.Retirement investing is for the “long-term”; however, our goal is to help you miss those large losses when the market has a major shift to the downside and preserve much of your current balances.Now we wait and see. Does the market continue “falling upwards” eventually making new highs or does it... 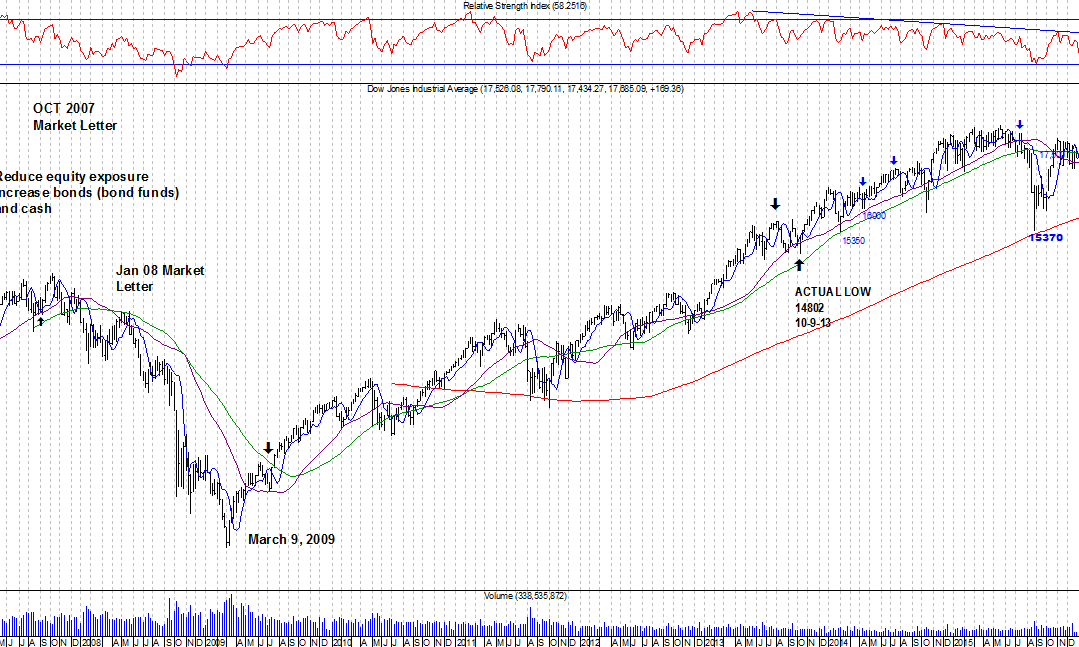 There are still no clear signs of a strong reversal to the downside. The market is struggling to extend the rally that began in mid-February. We describe this type of market action as “melting-up.” Our thinking is that the markets will need to go much lower before it can justify any higher levels ahead this year. Remember, we have been in an “up market” for the past (7) years and we just don't see where the economic catalyst can come from at this point. The increasing concern on the geopolitical front is definitely enough to spook many investors. Another big problem we see for the market going higher is volume (or lack thereof). Ever since these markets bottomed out in early February, volume has steadily declined. Not a good sign for the higher market argument when you consider how strong the moves have been over the last few months now. Something has got to give. This anemic volume cannot, and likely will not continue. Remember, it is volume that “fuels” the market in either direction. Company earnings season begins next week and if they look good, this could move the market higher, however, if the earnings reports are poor, this could lead to the down move we mentioned above. Now we “wait and see.” What to do now? Based on this current market view, we're going to stick with our previous fairly defensive posture for the time being. See our previous market letters for reference. MARKET SECTORS ENERGY (OIL) SECTOR Oil continues to be “range bound” trading between $36 to $42 and change. It also appears...